Is Uber Ride Pass Worth It? Here’s My Take (Updated)

Uber Ride Pass is an Uber subscription that price protects your rides — meaning that weather, traffic, and other disruptions won't affect the price of your Uber ride.

Uber is the ever-expanding on-demand transport service that has revolutionized the taxi industry around the world.

The business model of Uber is a great success. Many entrepreneurs have embraced it in many ways and have brought success to everyone who has used it wisely in their company.

Uber has a simple and innovative business model that made it billions of dollars in just eight years after it was founded.

A few months ago Uber launched “Uber Ride Pass” across the United States and specific states. The Uber ride pass works to offer a fixed rate up to a certain distance and a discount on the longest routes.

How much does Uber Ride Pass cost?

An Uber Ride Pass subscription is $24.99 a month and works for UberX or UberPool rides in eligible cities.

“A pass offers benefits, such as discounts on eligible trips, for a one-time activation fee, passes are still tested and are only available for a few months per month, while passes are temporary offers.”

Uber “Ride Pass” costs $24.99 a month and is only available in certain major U.S. cities, including Los Angeles, New York, Dallas, and more.

Prices at ride-share services rise or fall depending on demand.

For example, a ride into work early, ahead of the pack, is typically cheaper than a ride home at day’s end during peak commute time when “surge pricing” kicks in. 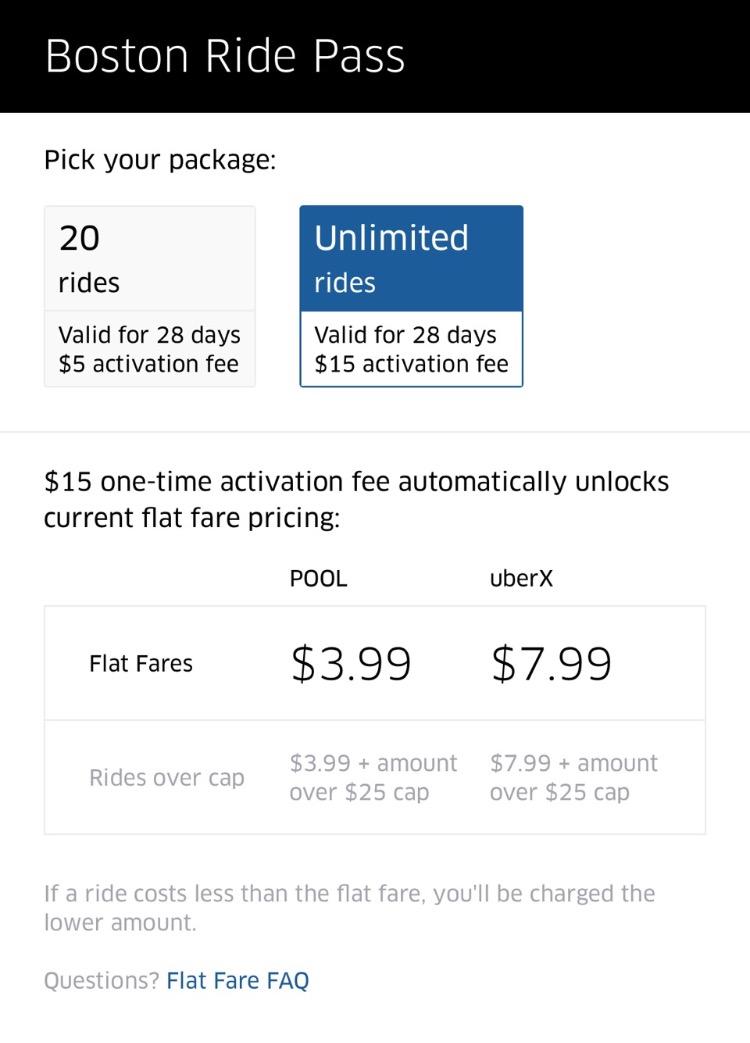 What is it good for?

Uber Ride Pass is a sort of subscription service for Uber.

This new Uber Ride Pass option is ideal for people who often travel between two locations. Whether you go home from the office or go to the gym.

I think it’s a great option if you commute during peak hours or if you live in an area where prices often rise because Uber Ride Pass charges you a standard rate. It is also viable if you are it using it for business travel.

I know friends who work near AT&T Park, and I can only imagine what a surtax looks like after a giant game!

How to get Uber Ride Pass

1. Open the Uber app on your iPhone or Android.

2. Tap the three bars in a circle in the upper-left corner to open the menu.

3. Tap “Ride Pass.” If it isn’t showing up in your menu, it means that you’re not in a city where Ride Pass is offered.

5. A screen will pop up giving you the details, terms, and conditions of Uber Ride Pass. Read them to your satisfaction, then, after making sure the credit card that the app pre-selects is the one you want to use to pay for the subscription, tap “BUY.”

Remember: The credit card that you use will be billed $24.99 a month until you choose to cancel the subscription. If you want to change what card is billed, simply tap “Switch” next to where it’s listed, and either pick a different one from your account, or add a new one.

So, is the Uber Ride Pass worth it?

In essence, we pay a discount that we regularly received from Uber not so long ago in the form of promotional codes, free of charge. Now they charge us for this promotional code, and they call it a ride pass.

Add to that the strict application of “either you take our route or lose your discount” is a real disadvantage, because the driver is often responsible for choosing a different route (he drives after all) and sometimes this is because the road has been closed/blocked for some reason.

(1) What is your regular Uber rides priced at?

(2) How much is alternate public transportation? and

(3) Does this include surge pricing?

Whether or not this is a good deal is going to depend from person to person.

We are on our phone a lot, right? Wouldn't it make sense to save, earn, and then invest? Check out our featured apps below.

Brian Meiggs
Brian is the chief editor of SavingJunkie and is a personal finance expert who has spent the last few years writing about how Millennials can make smarter money moves. He has been fortunate enough to have appeared in several online publications, including Yahoo! Finance, NASDAQ, MSN Money, AOL, Discover Bank, GOBankingRates, and more. He is also diversifying his portfolio by adding a little bit of real estate. But not rental homes, because he doesn't want a second job, it's diversified small investments in hands off real estate investing via an app called Fundrise.

SavingJunkie.com and all associated proprietary marks are trademarks of MeiggsMedia and its related entities. Other third-party trademarks are the property of their respective owners.